Did you know, that we as Christians, have a deep heritage in the form of Judaism? The passover, a major Jewish spring festival that commemorates the liberation of the Israelites from Egyptian slavery, has symbolism that takes on deep meaning for Christians. As part of their liberation, the Jews slaughtered a first born lamb and painted the posts and lintel of their doors with the blood so that the Lord would pass over them when He brought the plague of death to the firstborn.

Then Moses summoned all the elders of Israel and said to them, “Go at once and select the animals for your families and slaughter the Passover lamb. Take a bunch of hyssop, dip it into the blood in the basin and put some of the blood on the top and on both sides of the doorframe. None of you shall go out of the door of your house until morning. When the Lord goes through the land to strike down the Egyptians, he will see the blood on the top and sides of the doorframe and will pass over that doorway, and he will not permit the destroyer to enter your houses and strike you down.

“Obey these instructions as a lasting ordinance for you and your descendants. When you enter the land that the Lord will give you as he promised, observe this ceremony. And when your children ask you, ‘What does this ceremony mean to you?’ then tell them, ‘It is the Passover sacrifice to the Lord, who passed over the houses of the Israelites in Egypt and spared our homes when he struck down the Egyptians.’ ” Then the people bowed down and worshiped. The Israelites did just what the Lord commanded Moses and Aaron.

For Christians, the passover lamb is Christ himself, who is slain so that we might always live and never die. The extended leadership team celebrated a Christian passover (the short version) and had a great time of worship, fellowship, and celebration. 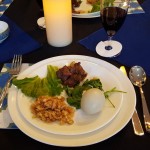 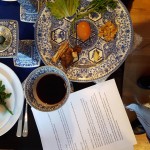 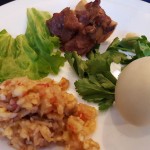 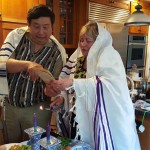 Armond and Sheilah lead us through the ceremony 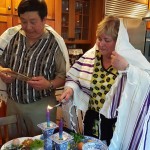 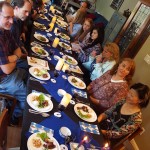 Many thanks to Athena and Sierra for the worship, and Armond and Sheilah for leading us through this sacred and meaningful ceremony!